My name is Ash, and today we’re going to talk about a game that’s a rarity nowadays. It’s an action-platformer of old-school style that can make you feel that long-forgotten feeling of rage-quits along with a growing desire to throw a controller at the wall. It’s the same feeling that I’ve had during my childhood playing Contra (never beaten it though) because it was that obnoxiously hard back then. As you know, modern games have made us soft and whiny casuals that start screaming their lungs off after each and every challenging game, calling it “The Dark Souls of [insert genre here]”. The examples of this vary from Cuphead and Hollow Knight to even Crash Bandicoot remake (srsly). As for this game, it is challenging but enjoyable, despite the fact that it has a ton of infuriating BS that sometimes enrage more than the game itself. In short, I like it and def recommend all of you out there to play it.

Valfaris is a planet that was corrupted by an unknown curse, spawning hordes of vile creatures, and Therion – the protagonist of the game, cleanses the curse, while also trying to figure out what has happened with his homeland. As you can see, the story itself is simplistic AF, but the inclusion of dialogues makes a decent job making it interesting enough to keep on grinding through the waves of different enemies and the bosses. 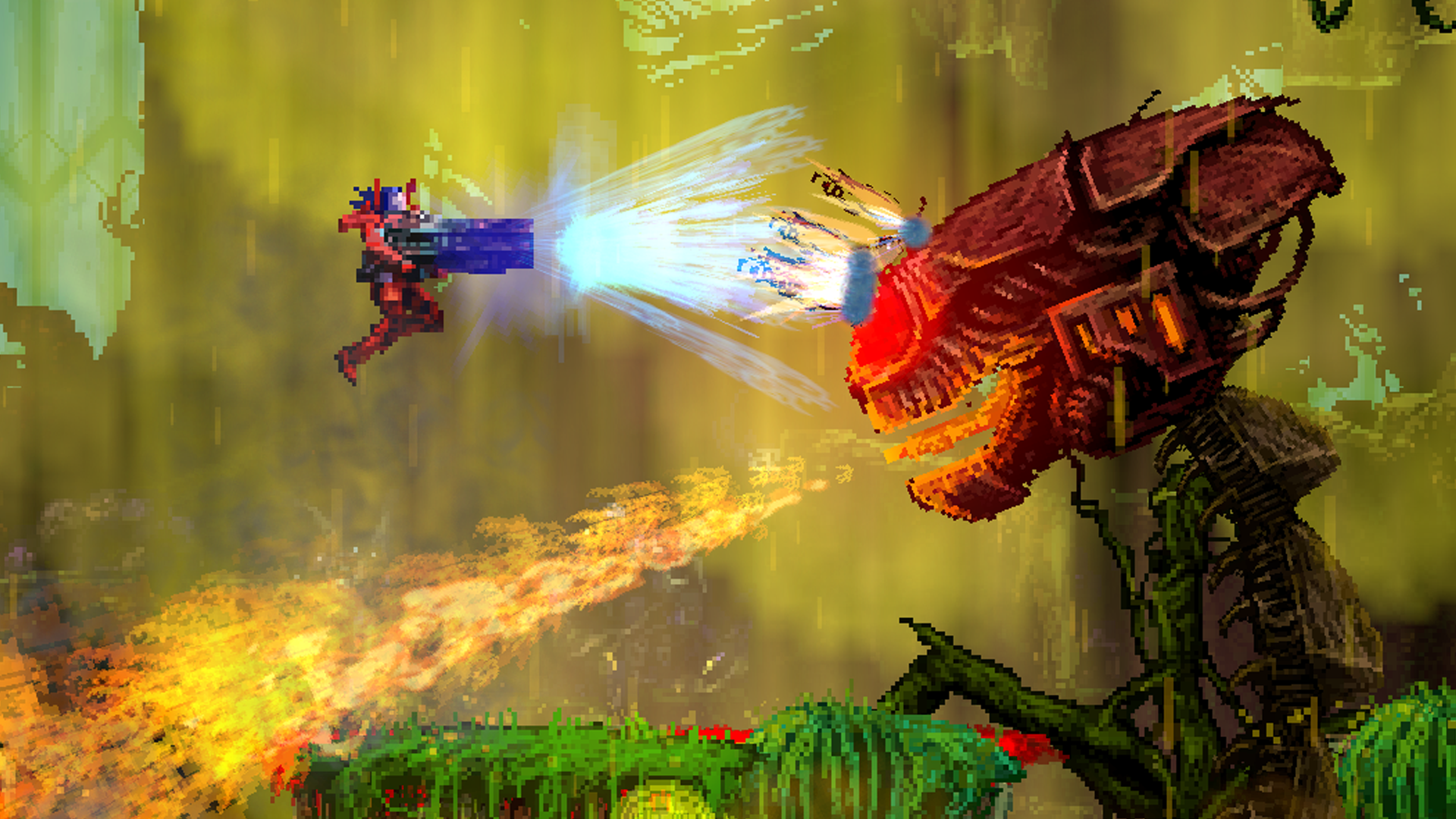 It’s pixel art game and a very unique one. The overall brightness of colors and design of enemies resemble Dead Cells a lot because each stage and level looks vibrant and uniquely distinct from each other to an extent that you can simply stop for a couple of minutes and watch how masterfully these levels were designed. In other words, it’s not the same pattern and/or template that is being recycled over and over with different color choices. Here we can see industrial settings combined with infected forests, poisoned lakes and deserted palaces, which creates the necessary dynamic to the gameplay in general.

Specifically, I liked the design of the weapons the most. Despite the fact that the arsenal was rather standard and traditional for almost every shooter game (pistols, shotguns, full-auto guns, rocket launchers, plasma guns, railguns etc.), their looks just felt badass enough to always try experimenting with them in combat. The same goes for the melee weapons ’cause they’re not strictly limited to swords only. It seems like they could offer the same variety of different shields, as well, but I don’t think that it would make a lot of sense in this type of game, especially taking into account the system of upgrades and progression here. 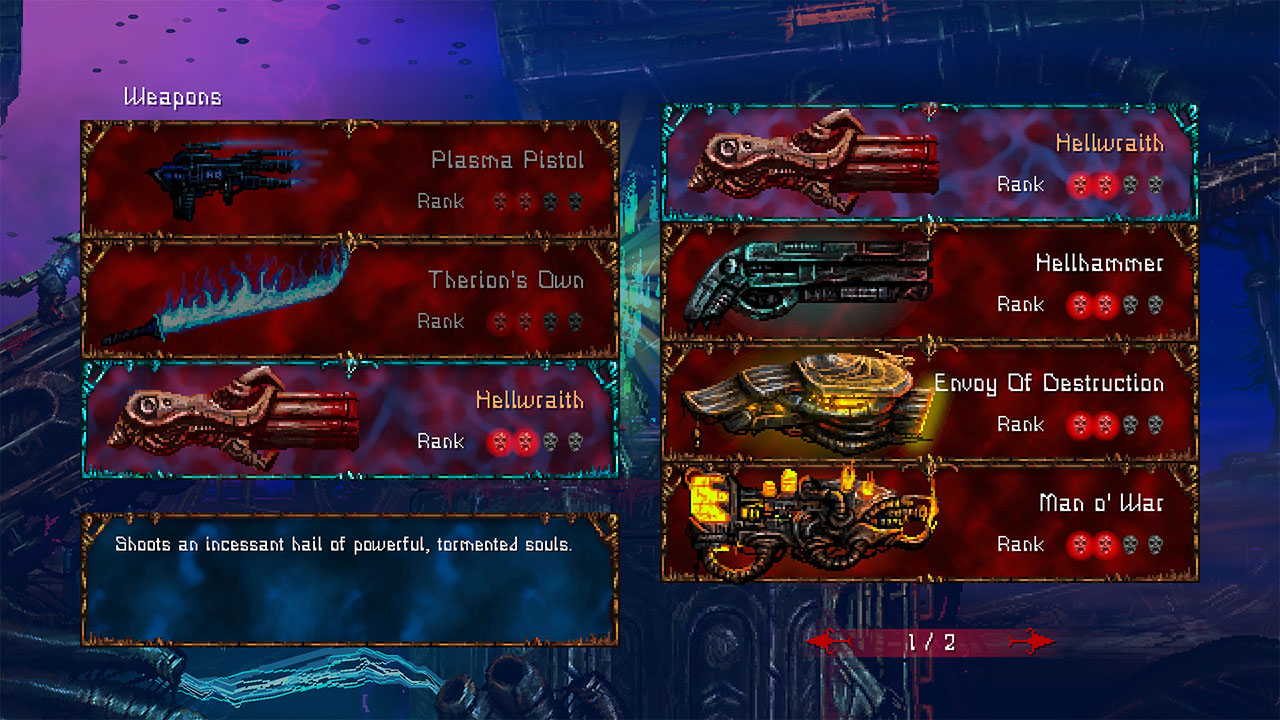 The materials for upgrades are limited and there is also an array of limitations on how you can get them and further use them. This makes the overall progression system as rather one-sided because for a single playthrough you’ll probably get only one (okay, maybe two) weapon upgraded to max level. I wish the game offered more versatility by either giving an ability to respec points or offering any sort of build creation because in reality the game pushes you to choose one gun, one melee weapon and a couple of super-weapons of your choice. As for me, I’ve completed the game with a full-auto semi-machine gun, standard sword and a plasma rifle that Therion holds on all the title screen. Some people might not care about this, but I’d personally like no upgrade system at all in such case because the variety of weapons makes little sense here. Especially taking into account the difficulty of the gameplay.

The slogan of Dark Souls fits perfectly here, when explaining the gameplay because you will die here, a lot. Despite the fact that Therion is equipped with badass guns and swords that cut the enemies like butter, he is not the most resilient guy, as well. In majority of cases, you will be outnumbered ’cause it’s normal for each combat encounter to spawn 5-6 enemies from different sides of the level at the same time. Especially taking into consideration different attack patterns, shooting them and dodging their attacks becomes a rather challenging task that requires a lot of retries. But the process is very-very fun due to the fast-paced progression and almost no delay between the retries. The developers could’ve simply make this game a rogue-like like Dead Cells or Enter the Gungeon because it’s the same feeling of combat here.

And when taken closely, there’re not that many enemy types. First, standard shooters with different weapons, second – fast and agile runners that use close-range attacks, third – shooters that lock on you before shooting, fourth – enemies that require parrying. However, different combinations of these types of enemies make each battle as satisfying as possible, making you want for more if you passed to the next level or eagerly retry it if you were killed. The bosses and mini-bosses demonstrate more variations, making them even more important parts of the gameplay, which I won’t discuss ’cause I don’t want to spoil anything. In short – it takes from a couple of minutes to a couple of evenings to beat them, but when you do, you’ll always get that sense of accomplishment that is being rarely given by other games.

And one more thing: you’ll be given a badass killer-bot to play! If this does not make you download this game right now, I don’t know what else will: Platforming here is also challenging and does not over-use the traditional patterns of platforming that you might’ve seen elsewhere. You’ll be required to dodge traps, shoot some locks to open doors and travel on a giant skull-centipede from one level to another, while shooting turrets and bots. Sometimes it has its own BS, when you seem to press all the right buttons at the right time, but the game does not register it properly, but these cases are still rather rare. In majority of cases, the challenges of platforming can be resolved through patience and learning required patterns, but sometimes you’ll just have to endure through it and not burst with anger.

By the way, the same goes for parrying melee attacks of certain enemies and bosses. Prepare to figure out the right timing ’cause its…how can I say? unique, I guess. It’s the same type of “uniqueness” that sometimes grinds my gears, especially when there’s no alternative but to parry certain attacks. In total, it’s 4,5 out of 5 for me – one of the better shooter games, which I’ve played for a while. This game clearly proves that it doesn’t have to be high-budget to be fun and enjoyable. I wish, the AAA-shooters will someday have the same level of challenge that does not become nonsensical and I’m more than grateful to indie-devs for keeping on making such awesome stuff.

(Thanks for reading till the end! Leave a comment about whether you played the game or not, whether you liked it or not and about what should I review next. Or tell me what you thought on Twitter.
Plus, I stream on Twitch occasionally, so you can ask me anything live if you catch me there. And now, that’s it for today, thank you once again and I’ll see you in the next one! Goodbye!)
0 0 votes
Article Rating
Tags #games #valfaris

Yves Tumor – Safe in the Hands of Love [ALBUM REVIEW]