FALLEN ORDER – Star Wars goes METROIDVANIA and it’s all I asked for!

My name is Ash, and today we’ll talk about another example of Respawn Entertainment carrying EA on its through the whole year. You might know these developers from games such Titanfall and Apex Legends; however, not many players around the world expected these guys to make a good Star Wars game for EA to publish it and not mess it up in the process. If you’re familiar with video game industry news, you might know that EA has already published several games about  Stars Wars universe that were not good. What is more important, they were not good mostly because of EA’s fault as a publisher, ’cause it were not the developers to publish the unfinished games with microtransactions for the full price of $60. To be honest, I was also rather skeptical towards the release of the new Star Wars Jedi: Fallen Order because of this. However, it turns out, the game is actually good and delivers really enjoyable experience.

First and foremost, let me be frank here. I did not finish the game yet. I’ve completed more than half of it and I can share my impressions quite validly because I believe the core gameplay content of the game won’t change drastically. The story may change somewhat but even if it turns out to be bad in the end, it was more than okay for the game segments that I’ve completed. So, now let’s proceed with the actual review. 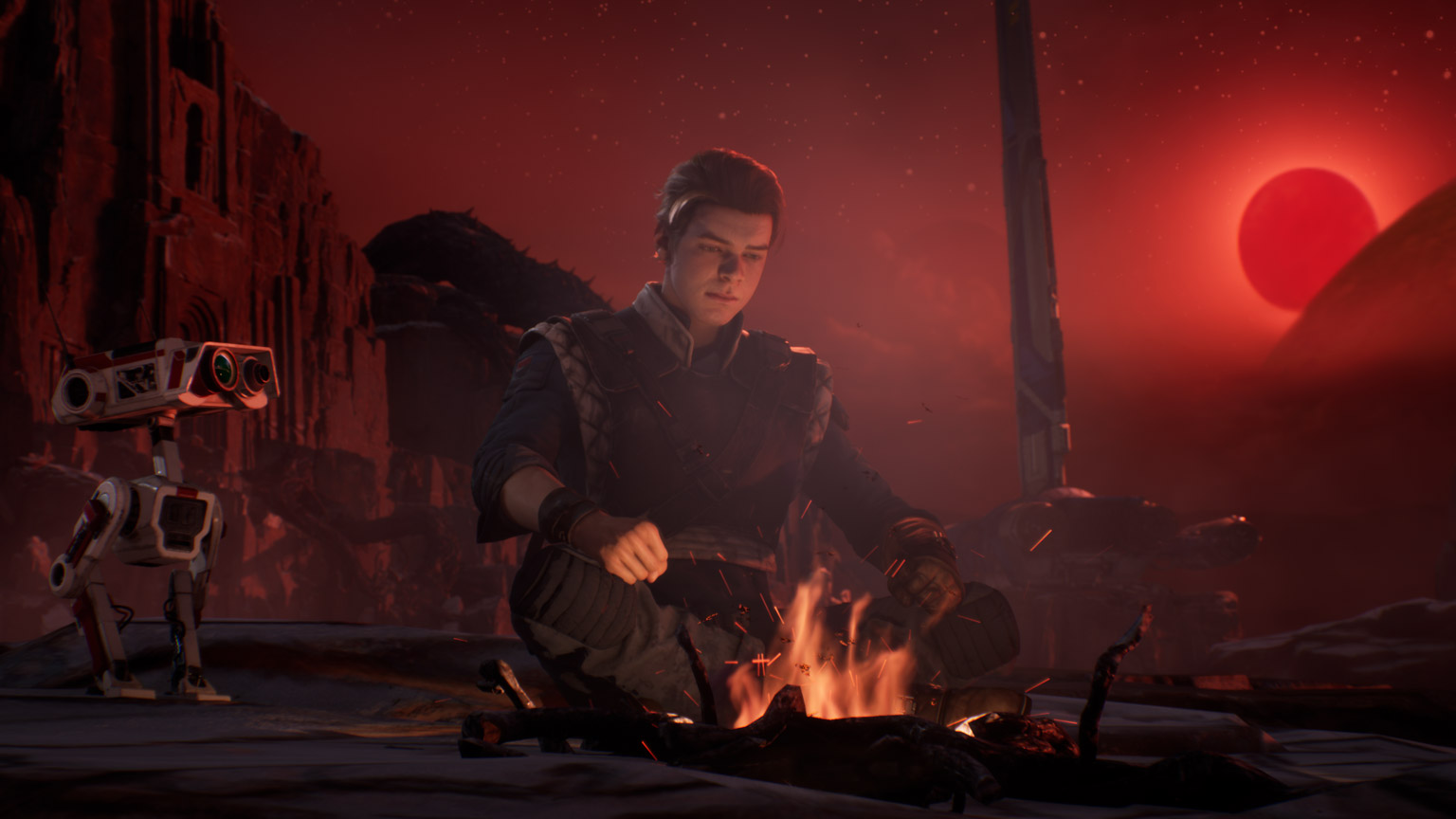 Here, we’ve got to play as a young Jedi – Cal Kestis trying to hide from the Empire after its order to exterminate all Jedi (following the events of the movie Star Wars III). Eventually, he joins forces with former Jedi Knight Cere Junda to find an ancient artifact that can not only ensure the survival of Jedi but their restoration, as well. Thus, Cal travels different planets in search of this artifact while fighting the Empire forces and various forms of wildlife.

Basically, that’s all the story you should know without any spoilers to understand what is happening in the game and get sufficient context for the gameplay process, which can be characterized simply. It’s metroidvania. Me, just like many other players around the world expected the gameplay to have more similarities with the previous SW action games like Force Unleashed or Jedi Academy, where either arcade-ish or slasher-ish battle was prioritized more compared to the rest of the mechanics. Here, it’s the combination of exploration, platforming and action with bigger emphasis on exploration that resembles classic metroidvanias. We’ve got several huge locations with several levels of access: with each ability Cal receives he can travel the areas more, unravel their secrets and fighting new enemies.

The combat here is fast-paced and based on dodges and blocks more than on hit combos and abilities. If you played Sekiro: Shadows Die Twice, you might find certain similarities, just like with the exploration aspect of the game. I cannot really say that combat is the strongest selling point for me, but it was performed on a decent level making all the blocks, dodges and parries satisfying and creating the feeling like I was holding the lightsaber myself. Of course, the repetitiveness of combat is there and sometimes makes the whole experience stagnating but I cannot say it was that much of a deal. However, you might also tweak the difficulty level of the game. If you play action games, do not choose Easy and Normal levels – you’ll most probably lack challenge. For me personally Hard was okay ’cause it was a step easier than the combat in Sekiro, while the bosses sometimes gave me hell, creating a needed level of challenge. 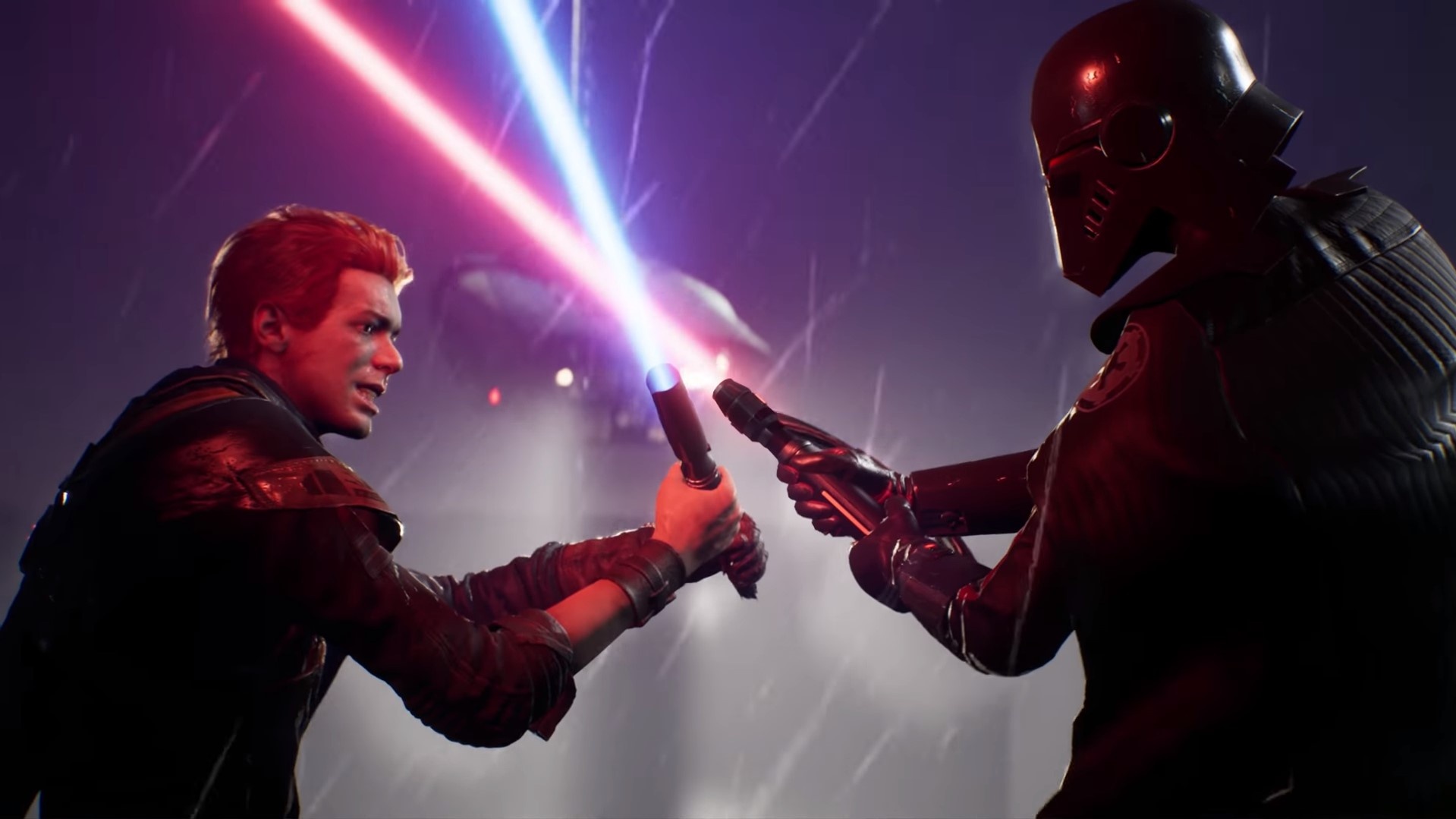 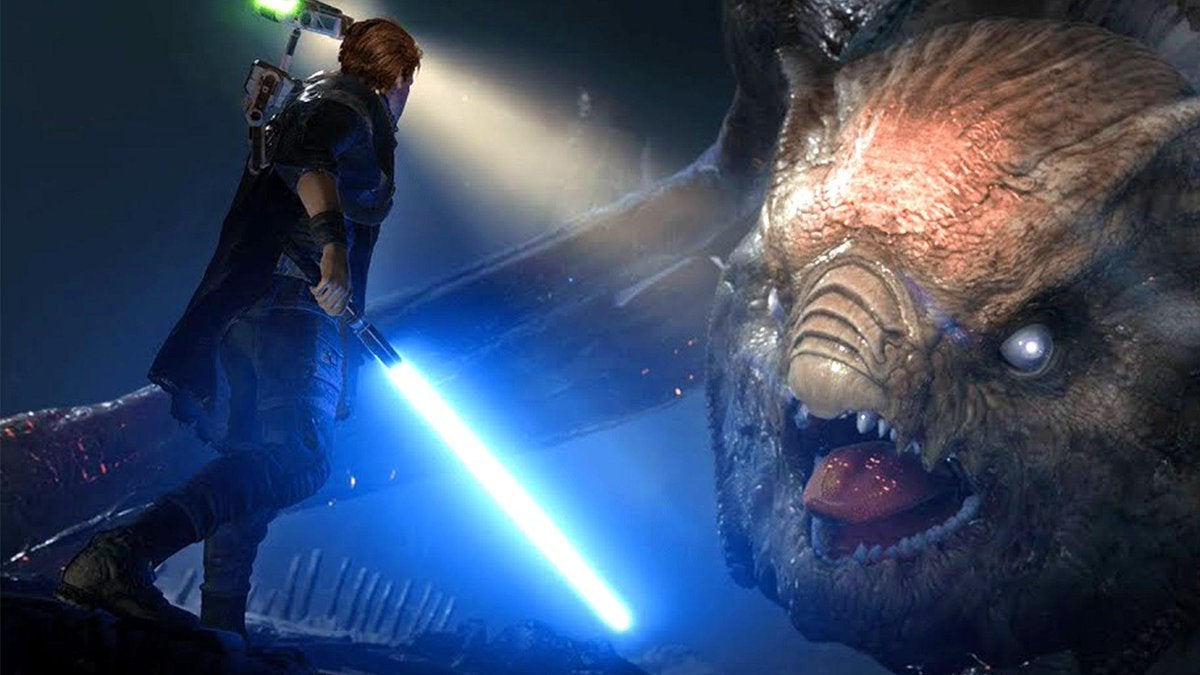 Certainly, there are some questions with the combat. Like, why can’t the lightsaber cut off limbs or why can it even block and parry wild beasts? It’s because this sword is supposed to cut through everything it touches and mostly can be stopped by another lightsaber. Also, it is unclear why the enemies respawn with each save point you unlock. The game has a similar system of saves to the Dark Souls’ bonfires, where you can save, rest, level-up the character while also reset the whole area and make the enemies reappear once again. For Souls-Bourne games it was logical, here it’s not. But, oh well, maybe it was an homage to the older metroidvania games, which did not concern themselves with such BS.

Platforming and exploration is what I liked the most about the game. You’ve got double jumps and wallruns like in Prince of Persia and, when combined with his Jedi powers (like slowing time, pulling and pushing objects) allows us to travel almost everywhere we can see and explore all the world’s secrets. It’s interesting to figure out the lore of the game and discover various stories supporting the plot and explaining actions of Cal’s allies and enemies, while also giving helpful info for the battles. And all of this stuff is provided by BD-1 – Cal’s trusty droid that helps unlocking everything that’s locked and scan everything that represents even slightest interest. It also provides a detailed map of the area that automatically highlights all the areas you’ve travelled, all the locked and recently unlocked zones that make traveling and exploring so much easier. Of course, this defeats the major characteristic of metroidvania genre: being suddenly lost and not knowing what to do. But here, it just saves time and does not allow the exploration process stagnate. So, kudos for that! 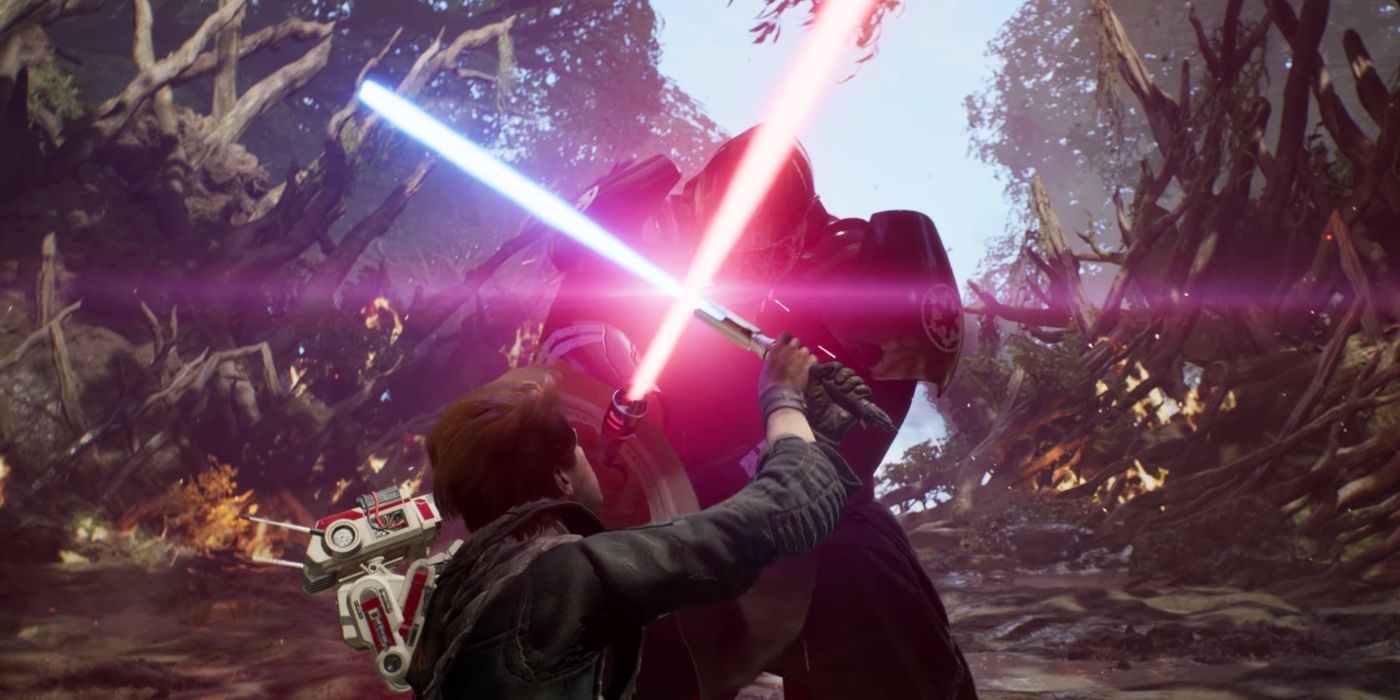 You won’t get that much of variety in combat because the lightsaber will remain the same, the combos are quite limited, you don’t have that much of Jedi abilities to use them aggressively; however, it might be a good thing. When you’ve got a limited number of tools to play with, while having various types of different enemies, you can get creative ’cause you’re always required to adjust to new fighting approaches. So, what are you allowed to customize? Cosmetics, of course!

You can unlock different color patterns for your ship, for your droid and for your outfit. I liked most of them, as they introduced somewhat fresher look on our characters, but I’d appreciate different outfit designs, as well. Like, it wouldn’t hurt to have Cal unlock real Jedi or Sith robes or other outfits worn in the SW universe. The sword customization is also cosmetic. While it is not that cool and really noticeable to customize the handle of the sword and choose the sword color only in the late-game segments, we could’ve been introduced some other designs like Kylo Ren’s sword or Second Sister’s spinning sword. I believe it would’ve been a better choice in terms of customization. But I won’t lie, having a single, double-edged and pair swords is awesome already. Having the ability to switch different types in combat is a much better thing than cosmetics imo. 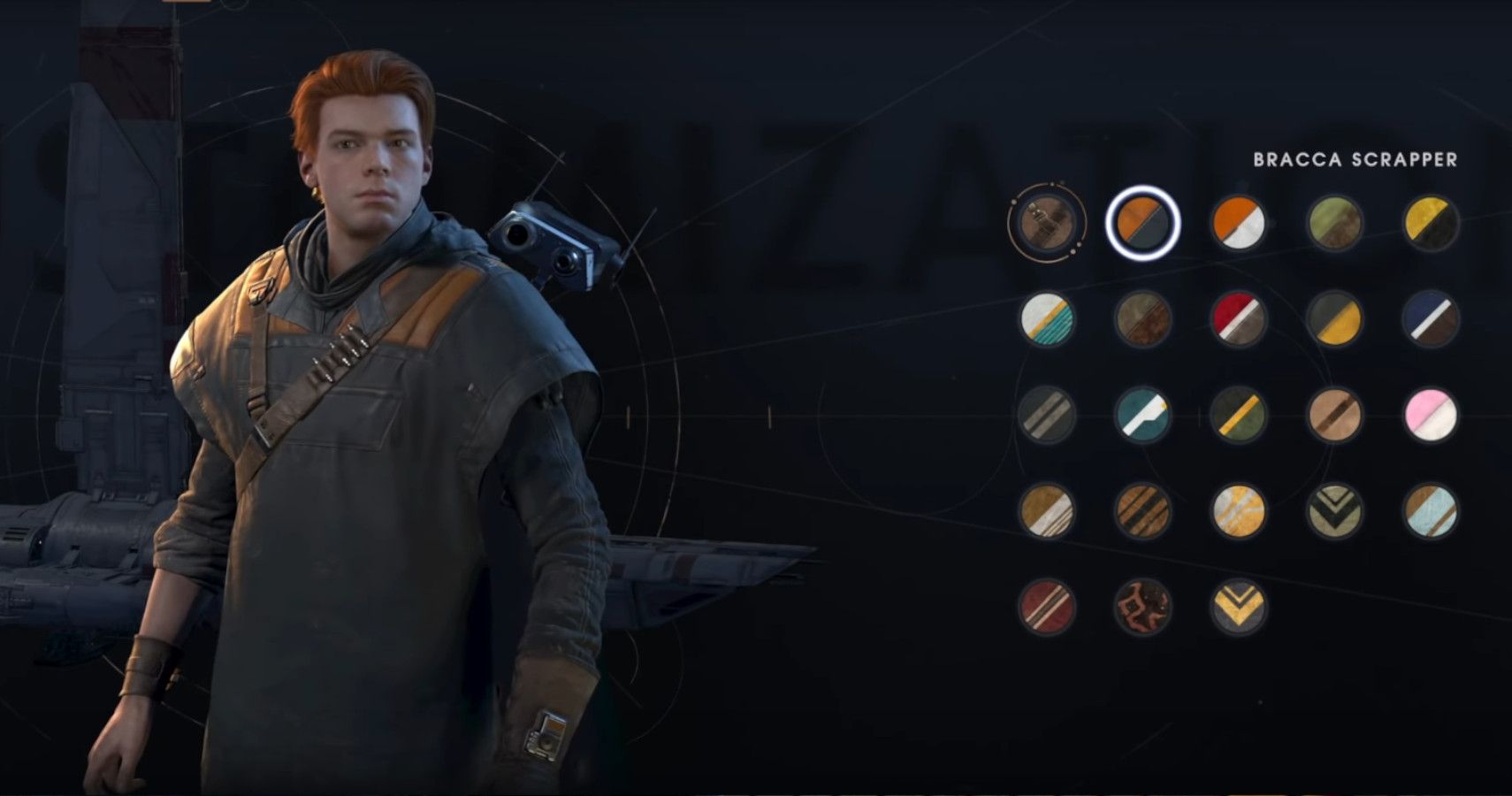 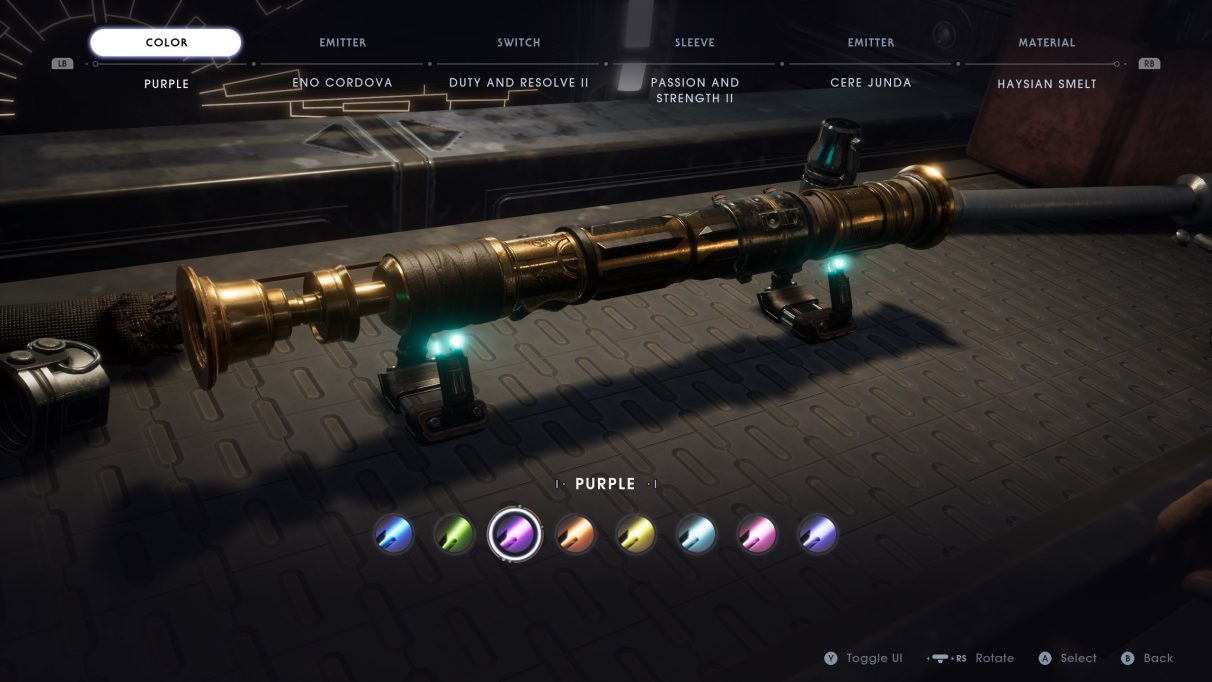 So, what do we have in total? A decent story with adequate characters and dialogues that don’t make us cringe each time they speak? Check. A combat that is enjoyable despite its limitations? Check. Exploration of metroidvania style with backtracking and unlocking new abilities as you progress? Check. Wallrunning? Check. Therefore, it is quite unsurprising that this game is one of the best-selling SW titles so far. Who would’ve thought that all that the players wanted was the good single-player game that is fun. And it is for me, as well. Of course the game could’ve been better, have more aggressive and slasher-type combat with deeper system of customization; however, I believe it’s hard to deny that it exceeded expectations. 4,5 out of 5 for me and definitely one of the best games of the year.